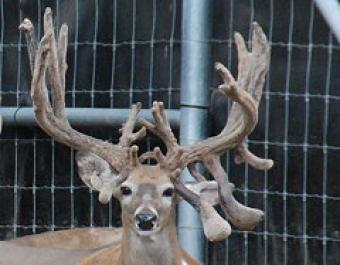 Crown Royal – NADR# 138545 – is a 2013 buck that is Triple Crown X Sadie. Not only does Crown Royal’s pedigree include Triple Crown, Bambi Yardstick, Shadow, Gladiator, Maxbo, Bambi Dagger Tine, Bambi Double Drop, Jake the Dreambuck, and High Roller, it also has six super does in it – Whitney, Tasha, Holly, 86C, Orange 516 and Woodward 217. Whitney is a great producing doe out of Tasha. Whitney produced Triple Crown and Junkyard. Tasha is a Jake the Dreambuck daughter who produced Brittany (the mother of Gladiator Hardcore), Excess, Freeze Frame, B1043 and Unforgiven. Tasha is Triple Crown’s Granddam. Orange 516 is Tex Roller’s womb sister and Woodard 217 who is the mother of Tex Roller and King George. Holly is the dam of Yardstick and Primetime. 86C is the dam of Gladiator and Secret Weapon. Crown Royal has a womb brother that at 2 scored around 265 and had around 24″ inside spread. Sadie, Crown Royal’s dam had a womb brother that scored 290+ at 3.