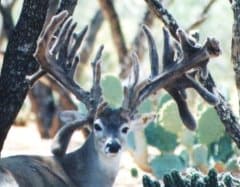 Jake the Dreambuck scored 300+ B&C at 4. His sire was Red Rock out of Tommy Dugger genetic lines. Although Dreambuck has some northern influence in his pedigree, he was the first 300″ buck raised in South Texas. Some breeders have reported that their Dreambuck offspring are mostly typicals. Dreambuck offspring have produced trophy stocker bucks and does for Texas ranches.